These are the things you need to think about.

The Freedom of Speech 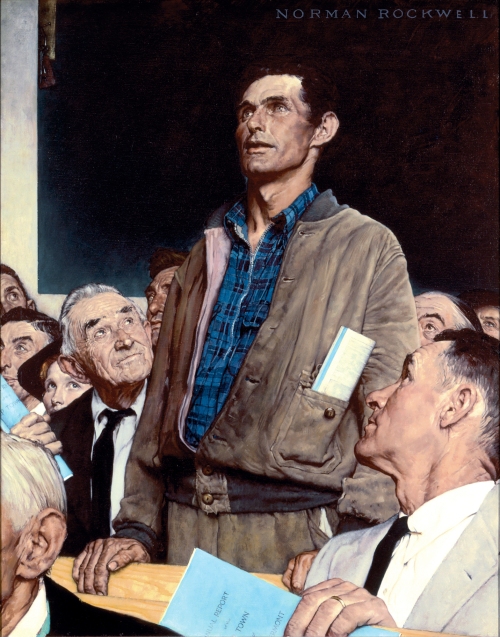 Norman Rockwell was an American artist whose career spanned nearly six decades. His portfolio of over 4,000 works includes hundreds of covers for the Saturday Evening Post, Look Magazine and the Boy Scouts of America. However, his most acclaimed work came in 1943 when he was commissioned to paint the Four Freedoms. The Freedom to Worship, Freedom of Speech, Freedom from Fear and Freedom from Want appeared in the Saturday Evening Post along with essays from contemporary writers explaining the importance of winning the war. The paintings toured the United States as part of a War Bond Drive, and have become American icons.

Rockwell considered the Freedom of Speech his best work. It depicts a man resembling a young Abe Lincoln standing up at a New England town meeting. The sole dissenting voice fearlessly expressing his opinion as his detractors and critics respectfully pay attention and listen. It’s a powerful and moving image. Perhaps it’s time to remove it from the Rockwell Museum in Stockbridge Massachusetts, and again send it on tour to remind us what Freedom of Speech is supposed to look like.

Today, the America of Rockwell’s Freedoms is being replaced by a culture of group think and political correctness that is stifling individual liberty and freedom. On the American college campus, it is no longer safe to exchange ideas and pursue truth because higher education has been supplanted by the indoctrination of a progressive ideology that demands the absolute and universal conformity to one set of beliefs. The dissenting voice will not be tolerated. If you fail to parrot the progressive creed your grades will suffer; your opinion shouted down, and your physical safety threatened.

Manhattan Institute Scholar Heather Mac Donald was shouted down at UCLA and forced to flee under police protection from Claremont McKenna College. Rioters forced author and provocateur Milo Yiannopoulos to cancel his speech at U.C. Berkley. Professor Allison Stange was injured by Middlebury College Students intent on disrupting the lecture of author Charles Murray. And Evergreen College Professor Bret Weinstein’s refusal to comply with the demand that all white people vacate campus, resulted in him being labeled a racist and the demand for his termination.

Unfortunately, this is not a new phenomenon. For decades, students have been shouting down people like former Secretary of State Henry Kissinger, actor Charlton Heston, Israeli Prime Minister Benjamin Netanyahu, and even Supreme Court Justice Sandra Day O’Connor. However, what makes today’s campus behavior, particularly worrisome, is that it is being done with the approval and support of the progressive administrations that run our colleges and universities. There is no punishment for students who use intimidation or violence to silence those with whom they disagree. On the contrary, administrators routinely cave to the student’s demands, emboldening their efforts to silence any opposition to the progressive agenda. Over fifty faculty members of Evergreen College signed a letter supporting the student’s whose threats of violence shutdown the school.

The justification progressives give for subverting the First Amendment is their abhorrence of “hate speech.” Progressives consider themselves better educated and more enlightened than most, and believe that they are acting out of benevolence and compassion when they oppress someone else’s civil liberties. As the Wellesley College student newspaper stated, “If people are given the resources to learn, and either continue to speak hate speech or refuse to adapt their beliefs, then hostility may be warranted.” But what exactly constitutes hate speech? Well, when a church wants to quell dissent, they call it heresy. When a government wants to crush political opposition, they call it disloyalty. And when a progressive wants to silence an opposing point of view, they call it hate speech. In other words, hate speech is anything that challenges the progressive world view.

The only absolute right we have is the right to life. The rest of our rights are conditional, meaning they are contingent upon and limited by the impact they have on other people’s rights. I may have the right to listen to my music as loud as I want, but I don’t have the right to keep my neighbors up at night. However, the freedom of speech is about as close as you can get to an absolute right because it is a fundamental and inherent right, that is absolutely necessary in order for an individual to actualize themselves as a human being. Subsequently, the bar to restrict or limit the freedom of speech needs to be set extremely high. Speech can only be restricted if it insights violence or directly threatens the physical wellbeing of another person. Speech that upsets, annoys, aggravates, or even enrages us is protected by the First Amendment. Being offended, or having our opinions and beliefs challenged, is simply the price we pay for living in a free society. When it comes to the freedom of speech, there is no such thing as a safe-space.

Every human being is born with the innate desire to seek out and know the truth, and it’s our freedoms that enable us to pursue that truth. But the pursuit of truth is humbling because each step forward only reveals more of our inadequacies and limitations. Those who arrogantly claim to have a monopoly on truth probably haven’t spent a lot of time actually pursuing truth. The tell-tale sign that someone is wrong is their unwillingness or inability to engage, listen to, or debate someone with a different opinion. Those students who believe that they are entitled to suppress someone else’s freedom of speech, would be better served if they put down the megaphones and took a class on the United States Constitution.

Norman Rockwell was often ridiculed by contemporary critics. They said that his work was too idealistic and didn’t depict the grimy realities of American life. Instead, Rockwell chose to portray the more uplifting and even humorous aspects of American culture. Rockwell didn’t disagree with his critics and never referred to himself as an artist. He instead, referred to himself as an illustrator, depicting American life not as it was, but as it should be. Maybe it’s time to take another look at Rockwell’s Freedom of Speech?